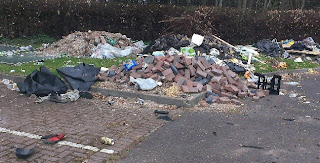 As reported in last night's "Evening Telegraph", a group of travellers have re-occupied the former GA call centre site, following the previous occupation.   As I indicated in last night's paper, I am anxious to see a swift resolution to the situation and hope the travelling community will henceforth use the official site at Balmuir Wood.

"There is a new illegal encampment of 4 caravans at the old GA call centre on Explorer Road.    We visited the site this afternoon with the Police to speak to them and take their details.  The wife of the boss said they will be gone by the weekend as they are only passing through from Aberdeen back down south.   I will contact Jones Lang & Lasalle to let them know they have another encampment & advise them to block the access from Riverside Drive."

With regard to the dumping of rubbish (see photo from the previous encampment above), the council's Head of Democratic and Legal Services has also advised me:

"Further to previous correspondence I met with Chief Inspector McKillop on Friday 10th May and he confirmed that he would consider using the Mobile CCTV Unit in appropriate cases in the future."
Blog Update by Bailie Fraser Macpherson at 06:30
Email ThisBlogThis!Share to TwitterShare to FacebookShare to Pinterest
Labels: Dundee Technology Park
Newer Post Older Post Home