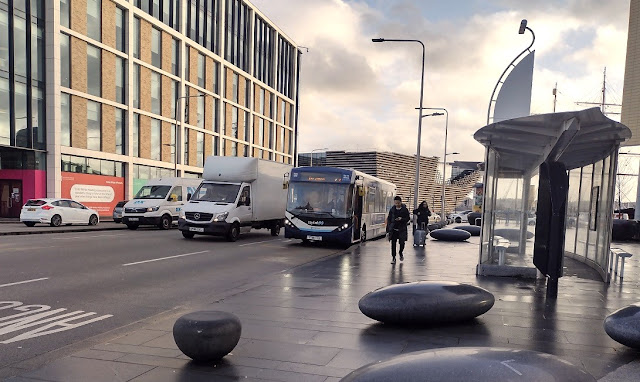 As reported in yesterday's Evening Telegraph, we have raised concerns with Dundee City Council about road safety at Dundee rail station, following constituents highlighting the lack of a proper bus bay outside the rail station – see photo.

Residents have raised with us the fact that, as there is no bus bay for the Stagecoach buses that drop off and pick up passengers at the station, the very busy inside lane is blocked when a bus is stationary at the bus stop.

The councillors contacted the City Council about this and were advised by the council’s Team Leader for parking and sustainable transport as follows :

“I do recall that there was a discussion about pros and cons of a bus lay-by (circa 2015/2016) at the station but I can't recall the detail of why it was rejected.   My best memory was that ultimately it was a considered decision taken by the then Director of City Development and based on a desire for high quality public realm in front of the station.

“In practice, the Stagecoach buses stopping at this location has not caused significant disruption to traffic and I am unaware of any accidents involving buses.   The sightlines are fairly good on the approach from east and west and much of the traffic should be travelling at reduced speeds.”

We really don’t accept the “high quality public realm” argument against putting in a bus bay here – public safety is paramount and the space in front of the station is really wide so a bus bay could have been accommodated without impacting on the quality of the public realm at all.

We did have the accident record database checked and although accepting that any bumps to date will have been minor as there have been no more serious accidents reported to Police Scotland since 2019, we still think it would be common sense to provide a bus bay – not just from the safety aspect but it would also help avoid tailbacks at this very busy stretch on road when buses are stopped at the bus stop, particularly at rush hour.

We have asked the Director of City Development if senior officers can discuss this request more fully.

There’s a wider issue about the disconnect between rail station and bus station services in the city but meantime we would like to see the bus situation right outside the rail station addressed.