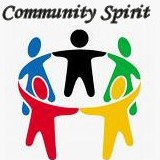 Earlier this evening, I attended the Annual General Meeting of Community Spirit Action Group - the community group for the "north" part of West End Ward, covering Pentland, Tullideph, Ancrum and the Cleghorn area.   The meeting took place at the Mitchell Street Centre.

Tribute was paid to Len Jamieson, the group’s long-standing secretary, who sadly passed away last week.    Len will be sadly missed, having been the group’s hard-working secretary since the group originally formed back in 2008.

At tonight’s meeting, there was an interesting presentation on the consultation about introducing 20mph speed limits where residents want this.    You can still take part in the consultation – more information about this is available here.   There was also a useful update from community safety wardens.   I updated the group about a number of local matters including street lighting and bus services.

A new committee was elected with George Chalmers re-elected as Chair and Ewan Stirling (a former Chair of the group) as the new Secretary.