Concern at over a month of road disruption "all for nothing"

Back in February, I advised constituents of the Scottish & Southern Energy project for replacement of high-voltage underground electricity cabling affecting parts of the West End Ward.   Details of the Temporary Traffic Order for the work that started at the beginning of April can be read here.

I have just received a letter from Scottish & Southern Energy as follows : 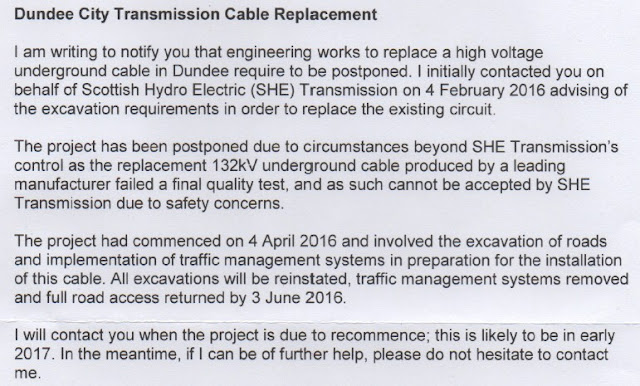 I have expressed my astonishment that, after five weeks of roads disruption, the company has abandoned the work as the new underground cabling failed a final quality test.

Whilst I appreciate that the company will not implement a cabling system that failed a safety test, questions have to be asked as to why this testing has taken place some five weeks into roads disruption on Lochee Road, Fleuchar Street, Scott Street, Blinshall Street, Glenagnes Road and other roads inbetween.    Why was testing of the new cabling not undertaken before the roads were dug up?     I have written to Scottish and Southern Energy seeking an explanation.

This project by Scottish & Southern Energy has had an impact on traffic over the past five weeks – for example, increased tailback on Lochee Road, the complete closure of Blinshall Street and Fleuchar Street and lane restrictions in Glenagnes Road and Scott Street.   To say it’s a disappointment to learn its all been for nothing and that Scottish & Southern Energy will be coming back to repeat it all again next year is something of an understatement.
Blog Update by Bailie Fraser Macpherson at 08:30
Email ThisBlogThis!Share to TwitterShare to FacebookShare to Pinterest
Labels: Roads
Newer Post Older Post Home