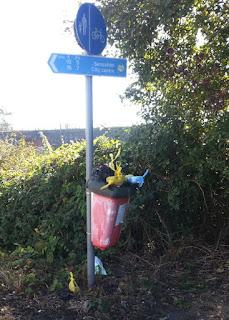 I received a complaint from a resident at the end of last week that the dog bin on the cycle path from Greenmarket to Roseangle (at the Roseangle end) appeared to be full to over-flowing - see right.   Not a pretty sight.

I immediately asked the council's Environment Department on Friday to have it emptied and tidied and this was done swiftly.   The department responded as follows :

"This has been investigated and the operator spoken too. The operator confirmed there were bags on top of bin and on the ground and approx 8.15am today.

Anyway, the bin is clean and empty now and we will continue to monitor."

As the local resident pointed out :

“I think it's because the bin itself is filthy and difficult to open.    Perhaps it should be replaced with a newer one.   People wouldn't dump bags on top if bin was accessible.”

That's a good point and I have requested that this old dog bin be replaced with a new one.
Blog Update by Bailie Fraser Macpherson at 08:30
Email ThisBlogThis!Share to TwitterShare to FacebookShare to Pinterest
Labels: Roseangle
Newer Post Older Post Home