Reiterating the call for 20mph zones in residential streets

Yesterday's Courier highlighted my call for the City Council to again consider lower 20mph speed limits in highly residential areas.   Part of the article is reproduced below : 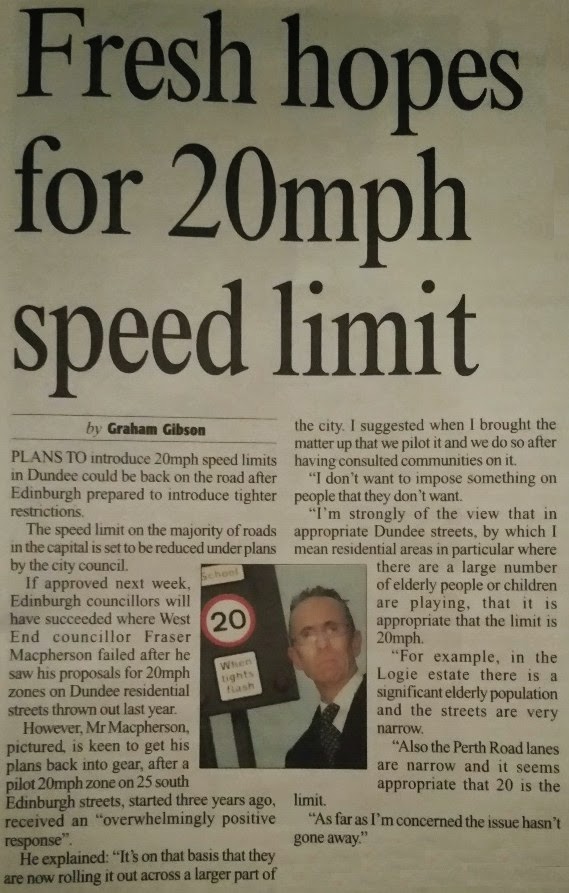 As residents will recall, last June, I proposed to the council's City Development Committee that the City Council consult communities on where local people feel a 20mph limit would be appropriate.     This failed to get support at committee by a single vote, due to the failure of SNP councillors to support a consultation exercise.

As I indicated in the Courier yesterday, the sort of locations I feel these may be appropriate are narrow streets in highly residential areas, particularly where there are large numbers of elderly people or children out playing.    Examples in the West End where residents have indicated support include the Perth Road lanes and the Logie area, both of which have very narrow streets and areas of sheltered housing.

I have written to Dundee City Council's Head of Transportation pointing out that the City Council's policy to oppose consultation on 20mph zones and implement them in appropriate streets is now at odds with government guidance - and what's he going to do about that?

There is significant evidence that 20mph limits in residential areas has a positive impact on road safety.   The road safety charity Brake has a useful car stopping distances calculator which highlights how much longer it takes to stop at 30mph and higher compared with at 20mph or under.

I think its important to explode a few myths about what I am proposing.    There is no suggestion of imposing lower speed limits without public consultation - 20mph should be introduced only where residents want it.    There is no suggestion that 20mph limits would be followed by calls for even lower limits.  Also, 20mph zones are only appropriate for residential areas - I am not suggesting major routes become 20mph.

It is clear, from the large amount of feedback I had from residents around the time of last June's committee decision, that there is significant public demand for this road safety measure.    If the City Council continues to hide its head in the sand about the new Transport Scotland guidance, I will take the matter back to committee, and will continue to do so until sense prevails.

At this stage, all I am asking for is proper public consultation on this matter with communities across our city.   What exactly does Dundee City Council fear about that?
Blog Update by Bailie Fraser Macpherson at 08:30
Email ThisBlogThis!Share to TwitterShare to FacebookShare to Pinterest
Labels: 20mph zones, Dundee City Council, Roads
Newer Post Older Post Home