Further to my article on 15th January about the X7 hospital bus service, my Perth & Kinross Council colleague Cllr Willie Wilson and I have now met with Stagecoach about the issues affecting the service - mainly related to the bus type used.    This has been reported in the Courier and the Evening Telegraph.

I reproduce below the news release issued to update constituents about the outcomes from what was a productive meeting : 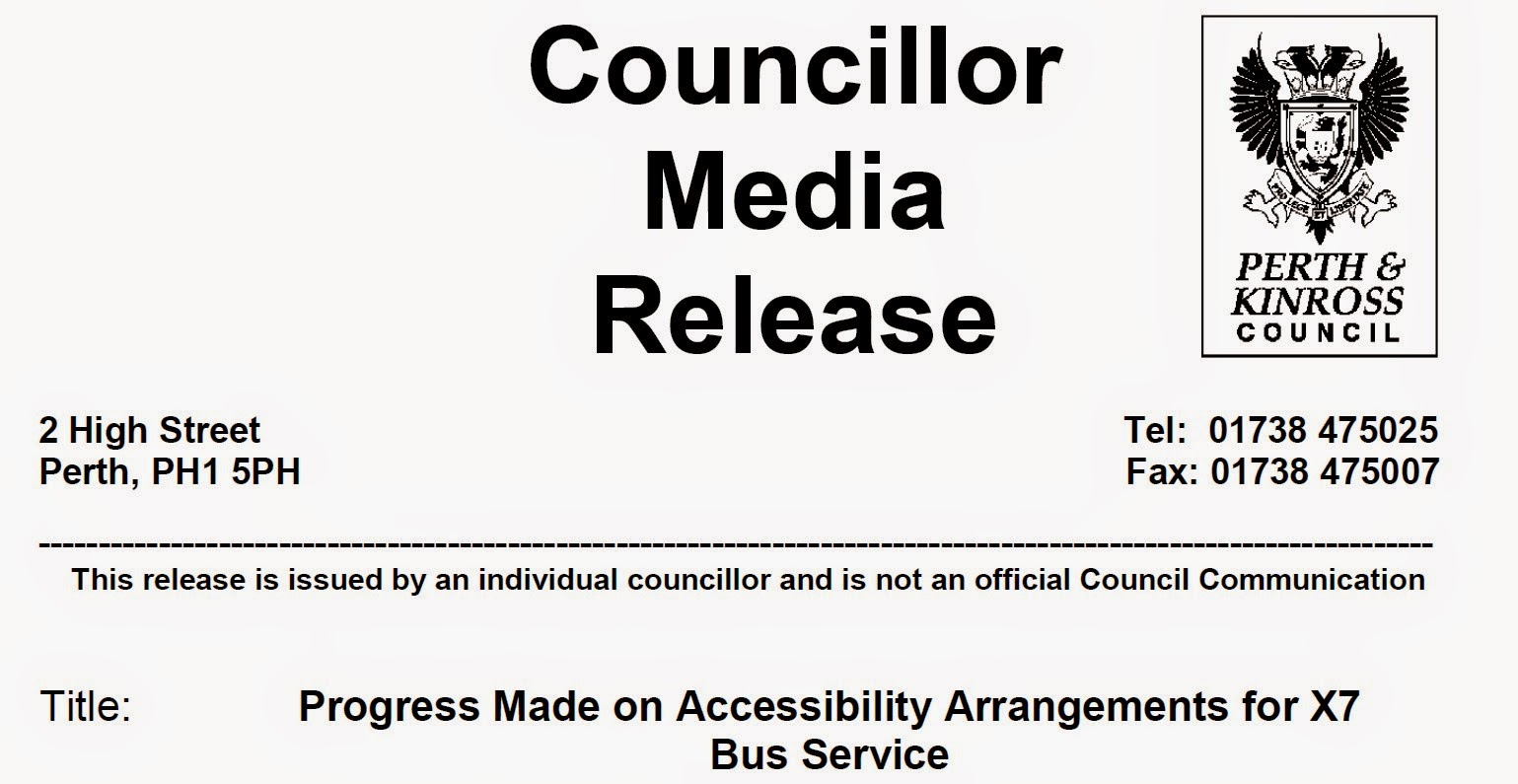 The meeting agreed a number of short-term measures that could be taken to try and improve accessibility; some of which have already been progressed by Stagecoach East Scotland.  These include alterations to the arrangements for locating wheelchairs within the coach and changes to the on-board CCTV system to allow better driver observation of people who may wish to leave the service.  In addition, Stagecoach are to review the availability of handrails that are of assistance to customers within the coach.  The company advised that they are in discussions about making the headroom greater in the stairwell area of the coach.  A review has already been carried out of the buzzer arrangements whereby people can alert the driver of the requirement to stop.

In addition to the above modifications of the existing bus, both Councils and Stagecoach are to examine opportunities for extending some journeys of the 16A Bus Service to Perth Royal Infirmary.  This would provide an alternative link between the two hospitals for passengers who find the X7 Service too difficult to access.  The meeting also heard that the increased passenger usage of this service had already approached nearly 20% in total (compared to the former X7 and 333 services).  This included a 12% increase on the former 333 Route between Ninewells Hospital and Perth Royal Infirmary.

“The meeting was constructive, led to agreement on a considerable number of small improvements to the existing bus which I hope will help passengers with accessibility.  In addition, if we can make changes to the 16A Service and allow a direct link between Perth Royal Infirmary and Ninewells using that service, it will at least provide an alternative journey for people who find it impossible to use the X7.  In the longer term however, we have pressed Stagecoach to provide a better form of coach on this service.”

“I was pleased to meet Councillors Wilson and Macpherson to discuss the X7 and highlight the tremendous growth in customers the newly combined X7 and 333 has generated.  The new coaches meet all relevant accessibility legislation and are supremely comfortable vehicles to travel on.  However, we do acknowledge that other than for two seats, the rest of the seating requires the use of steps to enable access, which some customers have expressed concerns about.

We do operate the alternative 16A service every hour between Ninewells Hospital and Perth City Centre using low floor buses for those that struggle with steps.  We will now work with Perth & Kinross Council to see if amendments are possible to the 16A to allow some journeys to extend beyond Perth City Centre to the Royal Infirmary.”

“Stagecoach has acknowledged that there is an issue with access to the current vehicles.  We have all agreed that this needs to be remedied and, in addition to short term measures agreed at the meeting, we are all looking towards medium term when more suitable buses can be introduced to the route.  This largely depends on user numbers, but if the current trend continues then we will have a strong case to press the company to renew the coaches dedicated to the route.”
Blog Update by Bailie Fraser Macpherson at 08:45
Email ThisBlogThis!Share to TwitterShare to FacebookShare to Pinterest
Labels: Bus Services
Newer Post Older Post Home