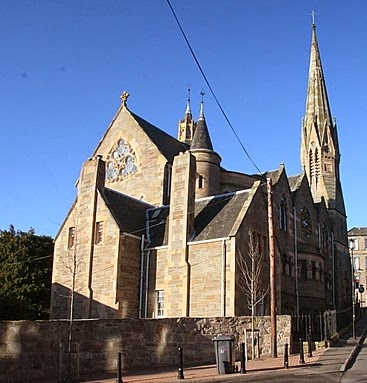 Over the past few years, on behalf of residents, I have raised concerns about the condition of the former McCheyne Memorial Church on Perth Road - both relative to the grounds and to the building itself.

I recently asked the City Council's Director of City Development for an update about the church and have been advised:

With regard to Planning, the owners of the property previously advised that the Vestry within the Church, which was previously in residential use, was being painted and that they intended to stay there when they visited the area.  I am not aware of any other works within the building that would require an application for change of use.
In terms of public safety, in 2011 the owner was contacted following complaints of delaminating masonry.  The owner advised that an inspection would be undertaken and any further loose material would be removed.  A visual inspection of the property undertaken on 16 April 2014 identified no public safety issues.  However, there are a couple of small panes of glass that are broken on the east elevation and I will write to the owners to request they cover up the holes. I do not consider they have any significant impact on the building being wind and water tight.

In response, I have asked that Dundee City Council ascertain from the owner that he does intend to make proper use of the building - or what his current intentions are.
Blog Update by Bailie Fraser Macpherson at 08:30
Email ThisBlogThis!Share to TwitterShare to FacebookShare to Pinterest
Labels: McCheyne Memorial Church
Newer Post Older Post Home