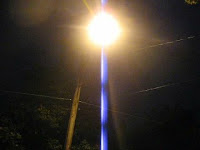 I have called for urgent action by Dundee City Council to address changes to street lighting policy that has resulted in street lights in the city not being replaced after they have been damaged by vehicles.

This is a city wide problem, where it has very clear that the policy of non-replacement of street lighting where a vehicle damages a lamp standard and the cost of repair cannot be recovered from the driver, is simply not working.
Residents at the south end of Seafield Road are very concerned at the non-replacement of a street light, which has plunged the street into total darkness.

It is simply not good enough for the SNP City Development Convener to claim that the policy was adopted during the previous administration because the budget was passed unanimously and all aspects were discussed in an all-party setting.
Of the various changes to street lighting policy, it became clear very early on in the new financial year that, in reality, the policy of non-replacement in these circumstances was a totally false economy and I raised my concerns with the City Development Director and the then Chief Executive back at the start of May of this year.
I have been promised time and time again that my concerns are being looked into and the latest is that the new Chief Executive has promised me an update later this week on a report that is apparently being written to review the policy.

This report has taken an age to come to fruition and for the SNP Convener to say he has only become aware of the issue in the past two months is incredible - the concern had been raised with senior officials months ago. I made clear to the Chief Executive that it was vitally important that this matter was resolved before the clocks changed to GMT as this clock change would exacerbate the problem, but the SNP administration appears to be asleep on the job.

The residents in Seafield Road have been incredibly patient but it is about time the City Council acted to resolve the matter.
Blog Update by Bailie Fraser Macpherson at 18:23
Email ThisBlogThis!Share to TwitterShare to FacebookShare to Pinterest
Labels: Seafield Road, Street Lighting
Newer Post Older Post Home