The project officer in the Housing Department's Improvement Unit has updated me as follows :
Logie - Kitchen & Bathroom Replacement 2009/10

I am sure you are aware that we have lots of containers on Logie Avenue.
I would like to reassure you that any damage to grassed area will be made good when containers are removed.
All going well I anticipate that 7 containers will be removed in January with the remaining removed by April 2010.
The contract is progressing well.
I will be updating the residents' group at their next meeting on 1st December 2009. 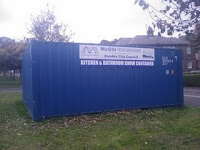 I can confirm that progress is being made towards starting work in January 2010.

I have made arrangements for a display container to be located at the garage site at the lower end of Logie Avenue on Tuesday 1st December between 3pm and 6pm for tenants to view kitchen/bathrooms and to discuss any particularly issues that they might have.
This particular container will be removed on Wednesday 2nd December.
Blog Update by Bailie Fraser Macpherson at 21:30
Email ThisBlogThis!Share to TwitterShare to FacebookShare to Pinterest
Labels: Blackness Road, Logie Avenue, Logie Estate
Newer Post Older Post Home