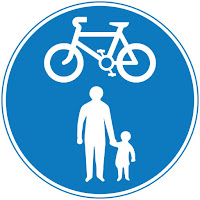 A resident recently contacted me saying :

“Do you think that you could request that the markings that distinguish and delineate the cycle lane from the footpath at Seabraes between Roseangle and Greenmarket could be refreshed/reinstated?

With the increased number of cyclists and pedestrians using this thoroughfare there needs to be greater clarity as to who should be where on this shared path.”

I raised this with the Director of City Development at the City Council who has responded helpfully as follows :

“I confirm that we are aware that in a number of areas around the city existing cycle path markings and signage have become difficult to see.

We have bid for funding as part of the “Spaces for People” phase 2 bid to allow us to reinstate any worn markings and enhance signage to encourage cycle usage.

If this funding is confirmed I will ask officers to ensure that this marking is replaced as necessary.”
Blog Update by Bailie Fraser Macpherson at 07:00
Email ThisBlogThis!Share to TwitterShare to FacebookShare to Pinterest
Labels: Seabraes
Newer Post Older Post Home