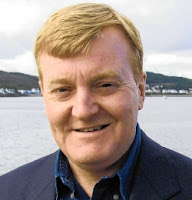 Like so many others, I was devastated to learn this morning of the passing of Charles Kennedy.

The memory of Charles that will stick most in my mind is of his speaking to voters at a parliamentary by-election we were both helping at and which the party had no earthly chance of winning.   I remember thinking at the time that he had such a good way with people, a naturally engaging, warm person.

"We have lost someone special.

That cheeky smile, that cracking wit, that Highland lilt and those wise words to illuminate the moment - that’s the Charles Kennedy who would capture the political hearts of many – as he certainly did mine.

Charles spoke with and for people with simplicity, charm and colour.

He used his calm judgement to make the right calls on so much too.  On Europe, on independence and, probably most significantly of all, on Iraq he gently sought to persuade the nation to his point of view and often succeeded.

I wanted him in the Scottish Parliament – a request he was considering.  He would have revelled in the campaign to keep Britain in Europe.   There is no doubt Charles had so much more to give.

I want to share my favourite story.  Charles came to help my flagging by election campaign in Dunfermline.  There was an older lady who shouted her support from across the street.  “We love you Charles!” He laughed and then chided her saying we’d had enough scandals, thank you.