The Road to Multicellularity : A free talk in the Zoology Museum 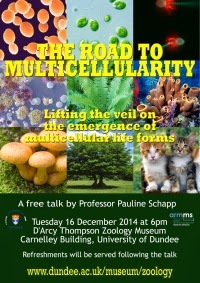 The appearance of multicellular organisms was a defining moment in evolution that gave rise to all the life forms that we see around us today. Multicellularity allows division of labour between cells and the construction of tissues and organs. However, multicellularity also requires novel mechanisms for communication between cells that allows them to function in a manner the benefits the whole organism.

In this free public talk, Professor Schapp will discuss how the transition from uni- to multicellularity is likely to have occurred and give an example of how the mechanisms that single-celled organisms use to respond to environmental signals became adapted to control cell-type specialisation in their multicellular descendants. She will also show how research into fundamental questions in biology opens up new avenues to address problems related to human health.

Pauline Schaap obtained a PhD in the natural sciences at the University of Leiden in the Netherlands in 1987 and was in 1988 appointed as Lecturer and later Senior Lecturer at the same University. She was appointed as Reader at the College of Life Sciences in the University of Dundee in 1999 and as Professor in 2003. She is a Fellow of the Royal Society of Edinburgh and the Society of Biology and a corresponding member of the Netherlands Royal Academy of Science.

We hope you can join us for this fascinating event. Refreshments will be served after the talk.
Blog Update by Bailie Fraser Macpherson at 08:30
Email ThisBlogThis!Share to TwitterShare to FacebookShare to Pinterest
Labels: University of Dundee
Newer Post Older Post Home