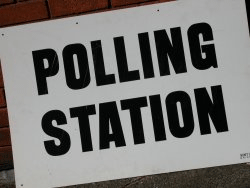 Not our elections yesterday, but a satisfactory set of results for the LibDems in England and Wales - Sheffield and Burnley amongst the council gains, and, in the circumstances of Labour throwing in everything including the kitchen sink in Liverpool, a triumph for the LibDem administration to hold on.

Clearly an excellent set of results for the Tories and at time of writing (Friday teatime) I can't really see Boris failing to take London (and I still can't understand why anyone would want to vote for him!) A total disaster for Labour - enough said.

Actually, there was one result in Scotland from yesterday - from a safe SNP ward (Troup, Aberdeenshire). The SNP held it (unsurprisingly) but the LibDem vote at 18.3% was 10.7% up.

One last comment - wasn't the Sky News TV coverage of the English and Welsh elections far superior to the BBC's, which seemed to always last to announce anything?

From Nick Clegg this afternoon :

Dear Cllr Macpherson
Just a note to thank everyone who helped with the election campaigns yesterday. We had a very successful night - beating Labour into third. Fighting the same set of seats as we did in 2004 at the height of the Iraq war, we're set to have more councillors and control of more councils than we did even then.

We have gained my home city of Sheffield, as well as St Albans, Burnley and Hull. We are also the largest party and came within just one seat of gaining overall control in Oldham, Warrington and Cheltenham. And we made important gains in key seats like Derby, Colchester and Reading.

In Wales too our progress has been impressive. We've made gains across the country and strengthened our position as the largest party in Cardiff. The results aren't yet in from London. But we do know that Brian Paddick and his team have done an outstanding job in flying the flag for us in that important contest.

You can get full details of the party's election results from http://www.libdems.org.uk.