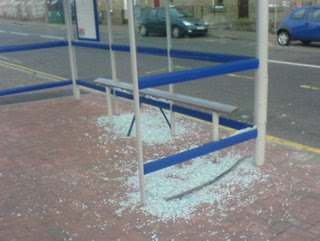 Many residents have expressed concern about the vandalism of bus shelters across the city. The following news release was issued today and, as I said during an interview with Radio Tay today, I am pleased at the proactive approach of Tayside Police on the matter :
Tayside Police is appealing to all Dundee residents to help them catch the vandals as they revealed that 18 bus shelters have been vandalised since the start of the year - all at the public's expense.

The problem is not exclusive to any one part of the city and encouragingly those responsible for seven of the incidents have already been traced by police and charged.

Superintendent Colin Mackay said, ''It is youngsters in the main who are responsible for this unacceptable behaviour, with both boys and girls being detected by our officers. I am pleased to say that we have been greatly assisted by the public in tracing those responsible.

''On a number of occasions residents have contacted us and told us what they have seen. That gives us a huge advantage in tracking down the vandals.

''Anyone who thinks they can vandalise public or private property and believes they can get away with it should think again. I want them to know that the people of Dundee won't put up with their behaviour and will contact the police if they see them involved in anti-social or criminal acts.

''By tolerating vandalism, we give the vandals the impression that we are prepared to foot the bill for replacement or repair. If the community works closely with the police, and vice-versa, we can make it absolutely clear that we're no longer going to pay the price of vandalism.''

Tayside Police will be making full use of the city's CCTV system, as well as mobile and deployable CCTV units to detect incidents of vandalisms and would again urge members of the public to call in as soon as possible if they see anyone vandalising property.

Superintendent Mackay said, ''Clearly a bus stop is a gathering point, but we want to hear from residents if their suspicions are raised by the actions or behaviour of people who are hanging around at or near to a bus stop.

''We want to tackle this problem as it comes at great expense to the public purse and we can deal with it robustly with the public's support.''

Anyone with information should contact Tayside Police on 0845 600 5705, or their local officer.
City Council Planning & Transport Convener, Cllr Fraser Macpherson, added, "Residents from right across the city have expressed their disgust at the mindless vandalism of bus shelters and I am pleased that Tayside Police is taking very proactive steps to attempt to address the issue.
"The Police very much need the Dundee public's help to tackle this and I would echo Superintendent Mackay's call for people to contact the Police if they see vandalism taking place or have any other information that can help the Police."
Blog Update by Bailie Fraser Macpherson at 22:00
Email ThisBlogThis!Share to TwitterShare to FacebookShare to Pinterest
Labels: Bus Services, Buses
Newer Post Older Post Home