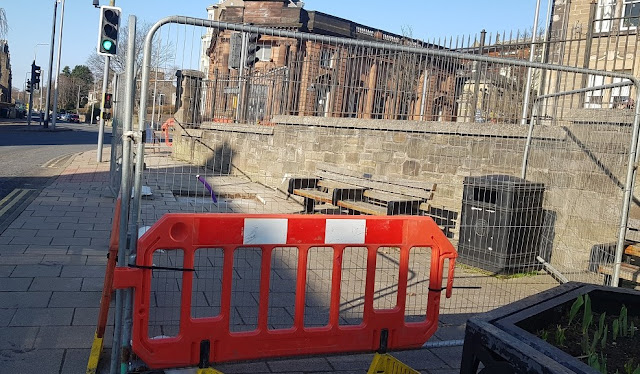 Residents will recall that last month I posted an update from the City Council about the Sinderins Beacon public art project, the final part of the "Dundee Decides" participatory budgeting consultation back in 2018.

The other parts of the project that was supported by residents back in 2018 were other public art projects - the "Perth Road" seating at the Miller's Wynd car park and the Eurobins artwork project - had been long-delivered.

The "Sinderins Beacon", the proposal for an entrance structure at the west end of the shopping area at Sinderins, has taken an age to progress and I have raised concerns about this    Residents have given a variety of views on the design but I have had real concerns about the lack of engagement - over a long, long period - as the Beacon project has moved forward and the detail in the financial outturn.

On querying this with officers I was very concerned at the way it has been managed.    After the initial seating and artwork projects were delivered, there was just over £14 000 left in the budget.    The actual cost now of delivery of the Beacon at 2021 prices is just over £30 000 - some £16 000 over budget.

As residents will have noted, the preparatory work to construct the Beacon has now started (see photo) and I asked officers if, given the project is alarmingly above budget, if the council was legally committed to the contractor, which it turns out it is.

I have raised questions about how this project has been managed and why a project so over-budget was "waved through" without any updates or consultation with local councillors before it was committed to.

I have been assured that the additional £16k can be found through underspends on other projects, but that's really not the point as there should be good financial management on each and every project.    There should also be regular updates on progress to councillors (which I have only ever received when I did the chasing) and also to the community - this project failed at the first hurdle in this respect.

The main points I have made to officers about my concerns are :

(a) any future participatory budgeting projects should have a commitment to keep elected members updated at every stage.

(b) that any material budget overshoot is immediately reported and agreement reached in a transparent way on whether or not to proceed before a project can go forward.

(c) specifically in relation to future public art projects, a proper engagement with local artists and designers is undertaken (and possible competition) so that we make use of the local talent in the city rather than the way this project was developed.

In the case of the Beacon, the council did seek the input of three community representatives who gave freely of their time and expertise and they should be thanked for their input and efforts.   However, the council "managed" the design process inhouse and making use of the wealth of artistic and design talent we have in the city would be the best approach in my view.   Duncan of Jordanstone College of Art and Design is literally just down the road ...!

In response to my comments, I was advised by a team leader in the City Development department :

"This is the first time that officers and elected members have been part of a participatory budget process and although awards have been won, I agree that there are lessons to be learned including keeping members up to date throughout the process.

"As part of the Broughty Ferry to Monifieth Active Travel Improvements we will be engaging with suitably qualified artists to submit proposals for public art to provide 'placemaking' on the route.  Hopefully a number of local artists will be keen to be involved and submit proposals for this key project."

I have been sufficiently concerned about this matter than I have taken it all the way to the council's Chief Executive, and I spoke with him last Friday about the matter.   He has positively taken on board the points I have made about how this sort of situation is avoided in the future.
This is important as the Scottish Government wants to see more participatory budgeting - where the public get a say on what projects get priority - and the City Council will be coming forward with further participatory budgeting in the future.
Blog Update by Bailie Fraser Macpherson & Cllr Michael Crichton at 07:00
Email ThisBlogThis!Share to TwitterShare to FacebookShare to Pinterest
Labels: Sinderins
Newer Post Older Post Home