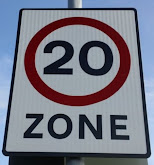 I have welcomed recently released research from the universities of St Andrews, Edinburgh, East Anglia and Cambridge that has revealed that the introduction of 20mph speed limits in Edinburgh in 2016 has had a positive effect on road safety, changing the trend of crashes from “slow decreasing” to “fast decreasing”.

The research covering Edinburgh’s 20mph residential areas shows that there was a monthly average of 95 crashes per month in 2016, the year the change was introduced, with that figure down to 64 a month by 2018.

These research findings clearly show that the 20mph rollout in Edinburgh – which is the city that has led the way in Scotland in terms of safer speed limits in residential areas - has resulted in significantly fewer accidents.

Here is Dundee, progress has been slower although the four new 20mph zones fairly recently introduced in the city under the “Spaces for People” funding – including parts of the West End around the Perth Road district shopping centre and Perth Road lanes and as far east as South Tay Street and West Port – is a good step forward.

Feedback to the West End 20mph zone from residents has been very positive although there is a clear need to ensure regular enforcement which I have raised with Police Scotland.

It is clear from feedback from residents that lower speed limits in other residential areas of the West End would be welcomed and I will continue to pursue this with the council.