As reported recently in the Courier (see below), I have called for the City Council to extend its free parking period in Dundee’s West End car parks given that the coronavirus health emergency situation continues.

The council took the sensible decision during the lockdown in the spring to make all its car parks free to use to assist key workers in the city centre and also people working from home in other car parks that charge across the city including in the West End.

However, it now intends to bring back car parking charges into seven West End car parks next Monday - 19th October - at a time when many local workers are still working from home and may well continue to be doing for weeks to come.

The point about the West End car parks is that they all cover residential areas and so the council is charging people to park near their own homes when they are being encouraged by Scottish Government to work from home.   That is a totally ridiculous situation and contrary to the Scottish Government message to work from home where possible during the health emergency.

I therefore wrote to the Director of City Development at Dundee City Council asking for an extension to take place and received the following reply :

“As you are aware, the original aim of the introduction of charges was, as well as generating income, to prevent abuse of the car-parks by commuters and to promote turnover of spaces to support local shops.

As charges in the rest of the city have been reintroduced, I do not think we could justify further suspension of charges in the West End. We did extend the moratorium on charging until the University started back.

I have reviewed and whilst I understand the issues that you raise, we have a committee remit to introduce charges, and now require to discharge that remit.”

I think at a time when the Scottish Government is trying to encourage people to work from home where it is possible, the City Council charging people for the privilege of parking near their homes in the West End is not responsible and sending the wrong message.

These are car parks in residential areas and I think that would be a common sense and helpful thing to continue the parking charges moratorium at this time. 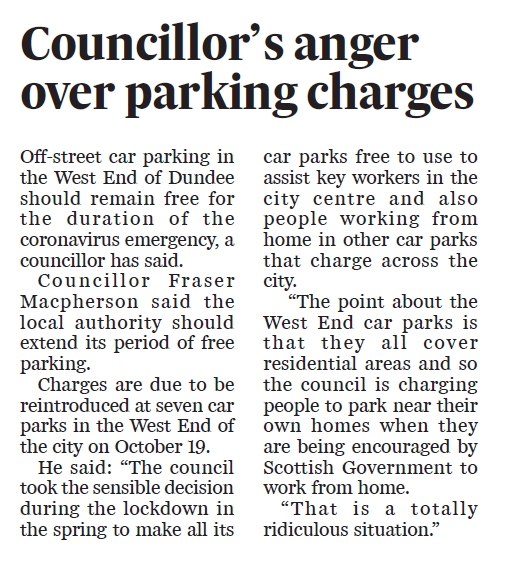