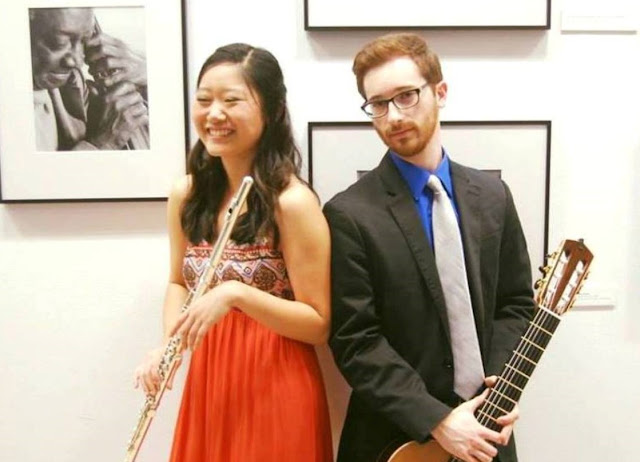 The Okapi Duo - Katie Kim, flute, and Brian King, guitar - is committed to making excellent chamber music accessible to all audiences while expanding the boundaries of the traditional ensemble.

Their synchronous and dynamic style has lead them to receive a number of awards including 2nd prize in the 2018 Southern Guitar Festival Ensemble Competition and 1st prize in the 2016 Great Composers Competition Series.  They have performed throughout the United States in California, New Orleans, Ohio, and New York.

Their compelling performances have led to an invitation to perform at the Carmel Guitar Society in Carmel, California and to pursue a Masters of Chamber Music at the prestigious Royal Conservatoire of Scotland.  This opportunity led to some of their first international performances in Glasgow and throughout Scotland.

The Okapi Duo is passionate about community engagement in the arts and reaching audiences that do not easily have access to live music.  They enjoy taking their music outside of the concert hall to venues such as public libraries, schools, community centers, and senior centers.

In 2019 they were accepted onto the Live Music Now Scotland scheme, an organization that brings music to groups of people who rarely get to experience live music.  In the autumn of 2017, Kim and King collaborated with Family Promise - an organization dedicated to helping homeless families in Lorain County, Ohio - to provide an artistic outlet for these disadvantaged families.

The duo is excited about pushing the boundaries of classical music and are constantly seeking innovative ways to contribute new music to the flute/guitar genre.

Their concerts often place traditional works such as a Bach Flute Sonata next to unconventional pieces such as arrangements of jazz composer Chick Corea’s music.  Along with writing their own arrangements, they also commission composers to write music for the duo.
Blog Update by Bailie Fraser Macpherson at 07:00
Email ThisBlogThis!Share to TwitterShare to FacebookShare to Pinterest
Labels: Friends of Wighton, Wighton Heritage Centre
Newer Post Older Post Home