Friends of Wighton event this Saturday! 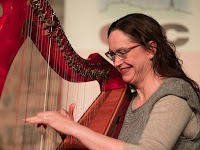 We are delighted that the wonderful Karen Marshalsay is including the Wighton in her album launch tour.

Karen is a master of all three Scottish harps – the warm sounding modern gut-strung lever harp, the clear ringing wire-strung clarsach of the Highlands and Gaelic culture,  and the Baroque bray harp with its buzzing sitar-like.   The new CD  *The Road To Kennacraig* shows off her skill and musicality beautifully.

With a particular interest in playing pipe music on the harp, Karen has worked with Allan MacDonald, of the famous Glenuig piping brothers, featuring in his acclaimed pibroch concerts, including the Edinburgh International Festival’s Herald Angel Award-winning /From Battle Lines to Bar Lines/ series in 2004. She also featured in the National Piping Centre’s /Ceòl na Piòba/ concert in 2013 and has worked with African, Paraguayan and Indian musicians on multi-cultural projects including /Yatra/, which premiered at the Edinburgh Mela in 2008. More recently she guested with the Russian String Orchestra, playing her own compositions, during the Edinburgh Festival in 2018.

As well as appearing in solo concerts, Karen is currently a member of Irish folk music legend, flute and whistle master and singer, Cathal McConnell’s trio. She has also produced new works for Celtic Connections’ New Voices series, Hands up for Trad’s Distil showcase concerts, and Drake Music Scotland, and she was Composer in Residence with Harps North West in 2016.