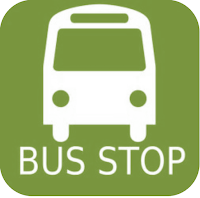 For some considerable time, along with nearby residents, Harris Academy and its Parent Council, I have suggested to the City Council that the westbound public bus stop on Perth Road that lies just east of Harris Academy should be moved very slightly west to in front of the school.

This would have the following advantages :

+ Far better standing area for passengers waiting for a bus as the plaza in front of the school is spacious.

+ Less crowded situation than where the current bus stop is when passengers are waiting at the stop and school pupils are exiting the school at the end of the school day.

+ The existing bus stop is extremely close to the School Crossing Patroller;  in front of the school is not.

There has been a lengthy debate with council transportation officers about this but, at last, a trial move has been agreed to ascertain how well this works - this will commence today.

This update was sent by a City Council transportation officer to Harris Academy last week which fully explains the trial period arrangements :

"I refer to the Harris Academy Parent Council Meeting of 8th March 2018 where (we) agreed to investigate the possibility of moving the bus stop for a trial period to monitor the effect of the bus stop move especially at the end of the of the school day.     I am pleased to confirm that we have agreed to move the bus stop into the bus lay-by in front of the main school entrance for a trial period to commence from Wednesday 9th May until Friday 1st June inclusive.

Can you please notify staff and parents that the bus stop will now be out of action for general vehicles use during the trial period and that any misuse may result in the vehicle receiving a Parking Charge Notice (PCN).

The transport team will monitor the effect of the local bus services using the revised stop during the trial period with a view to making a decision about the trial period becoming the permanent stop location."

During this period, I would welcome any feedback from residents - many thanks.
Blog Update by Bailie Fraser Macpherson at 07:00
Email ThisBlogThis!Share to TwitterShare to FacebookShare to Pinterest
Labels: Bus Services, Harris Academy, Perth Road
Newer Post Older Post Home