The Quiggs at the Wighton

Cappuccino Concert with The Quiggs 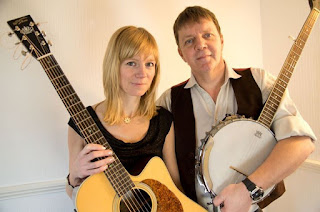 Together they comprise “The Quiggs”. Stephen and Pernille share a common feeling for the tradition of folksong and both know a good song when they hear it. The combination of the two voices in close harmony in songs whether traditional or contemporary  interspersed with anecdotes and a touch of humour has received much praise from both audiences and organisers. They have toured together in Denmark, Germany and The Netherlands with great success. A concert with The Quiggs is a chance to hear folksong in its original form - simple, yet highly expressive, beautiful harmonies and songs that seek the audience's participation.

The duo has previously released the album "River of Time" in 2015, which received fine reviews and airplay on several programmes in BBC and other European radio stations. In March 2017 “The Quiggs” released their new CD „Seeds I Didn't Sow”, which recently featured as album of the week on Celtic Music Radio and was described by Folkradio.uk's Mike Davies as, “Unquestionably one of the best folk albums of the year.”

Indeed the year ahead looks like a busy one for “The Quiggs” with concert and festival bookings in Scotland and across Europe.

Stephen Quigg, former member of the legendary folk group The McCalmans, has performed as a folksinger for 40 years. Stephen was part of the McCalmans for 10 years during that time, he performed at festivals and concerts big and small both in Scotland and abroad. He continued to work solo alongside his career in the group and has toured the length and breadth of Scotland  during most of his life. Stephen's repertoire ranges from traditional ballads to footstomping songs of battle well mixed with a certain amount of humour. Stephen blends contemporary and traditional material with ease, which ensures a varied evening. Stephen accompanies himself on guitar, bodhran and banjo and with an outstanding voice you can watch him capture the attention of any audience.

Pernille Quigg is of Danish origin but has been living on the west coast of Scotland for the past 12 years. As the surname reveals, she married into the Scottish folk scene after which she herself became part of that scene. Pernille, though, was no stranger to the music and has been singing folk songs for many years, she is now also being noted as a gifted songwriter. Pernille plays guitar and sings in a voice often described as crystal clear. Her repertoire extends from traditional to contemporary to original songs – the common denominator though is, that they all have a story to tell. Pernille released her debut album “Driftwood” in 2012, which received fine reviews in print and was also aired on both Danish Radio and on BBC's Radio Scotland amongst others.

Arrive at 10.30am to grab a coffee and a newspaper, then sit back and relax from 11am-12 noon to enjoy the concert!

£5 tickets on the door, and a suggested donation of £1 for coffee and newspaper.
Blog Update by Bailie Fraser Macpherson at 07:00
Email ThisBlogThis!Share to TwitterShare to FacebookShare to Pinterest
Labels: Friends of Wighton, Wighton Heritage Centre
Newer Post Older Post Home