The Steeple comes to the rescue! 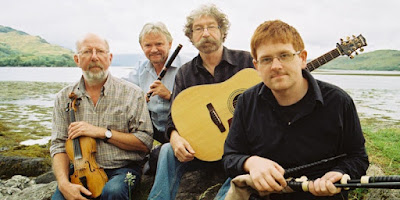 Tayside fans of legendary folk band the Tannahill Weavers thought they were going to miss out on their 50th Anniversary Tour when maintenance work on HMS Unicorn threatened to scupper their planned 11th April gig there.   With this special tour involving some 80 gigs, and ranging from the Rockies to the Rhineland, getting the band on another date was proving impossible.

Step forward the good folk at The Steeple in the Nethergate!   They heard of the problem, had the date available and so the show will go on, Wednesday 11th April at 7.30pm as planned, in their beautiful and historic venue.

Tickets, priced £12/£10 concessions, are available here and from Dundee Box Office - 434940.  Tickets already purchased for the Unicorn are valid for The Steeple, of course.

As they celebrate their 50th anniversary in 2018, the Tannahill Weavers are one of Scotland's premier traditional bands. Their diverse repertoire spans the centuries with fire-driven instrumentals, topical songs, and original ballads and lullabies. These versatile musicians have received worldwide accolades consistently over the years for their exuberant performances and outstanding recording efforts that seemingly can't get better...yet continue to do just that.

In 2014 they were joined by innovative piper Lorne MacDougall, who likes people to be aware he wasn’t even born when the others started this musical journey!  Lorne comes with a high pedigree, having, among many other highlights, arranged and performed pipes for the Disney Pixar movie "Brave."

Over the years the Tannies have been trailblazers for Scottish music, and their tight harmonies and powerful, inventive arrangements have won them fans from beyond the folk and Celtic music scenes.  Their immense contribution was acknowledged in 2011 when the band was inducted into the Scottish Traditional Music Hall of Fame.

As they reach their 50th anniversary in 2018, the Tannahill Weavers are firmly established as one of the premier groups on the concert stage. From reflective ballads to footstomping reels and jigs, the variety and range of the material they perform is matched only by their enthusiasm and lively Celtic spirits.
Blog Update by Bailie Fraser Macpherson at 07:00
Email ThisBlogThis!Share to TwitterShare to FacebookShare to Pinterest
Labels: The Steeple
Newer Post Older Post Home