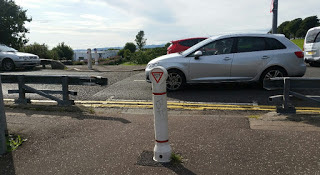 I have previously raised residents' concerns about pedestrian safety near the Roseangle playpark since the playpark was improved and footfall significantly increased.

Having have received more concerns, I again contacted the City Council's roads and transportation division about this and have received the following feedback from one of the roads engineers :

“Myself and three other colleagues visited this location to assess the situation.

As you are aware, our road safety budget is prioritised by identifying accident cluster sites within the city and providing improvements to reduce the likelihood of recurrences. At the location in question, there have been no recorded injury accidents at this location in the last three years and so would not displace any other cluster site under consideration.

While we were on site … vehicle speeds approaching this crossing point were not excessive and those vehicles approaching from Riverside Drive were slow having turned the tight radius onto the railway bridge.

I will carry out further surveys at this location to determine if there is a significant problem.”

I will be continuing to pursue this issue and will keep residents updated.
Blog Update by Bailie Fraser Macpherson at 08:30
Email ThisBlogThis!Share to TwitterShare to FacebookShare to Pinterest
Labels: Riverside Approach, Roseangle
Newer Post Older Post Home