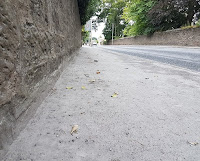 I have again strongly complained to the council’s Roads Maintenance Partnership about “unacceptable” road surface dressing with chippings on part of Perth Road west of Harris Academy that left the area covered in a thick dust and led to many residents’ complaints.

I have requested urgent action to deal with large amounts of dust in the area – particularly on the pavements – nearly three weeks on from the original road surfacing work taking place.

I initially raised concerns when the surface dressing took place during the last week of June following numerous constituent complaints.

The council’s Roads Maintenance Partnership has since responded to my complaint as follows :

“We have been using this aggregate in surface dressing for a number of years with great success and it is also a popular stone used by other surface dressing contractors in Scotland. The Arbroath Road section completed last year was the same specification as used at Perth Road this year.

Unfortunately as you are aware we experienced a significant level of early life dust release following laying and I can confirm this was in excess of what was expected and planned. Please accept my apologies for this. We believe the dust is associated with the stone crushing when initially rolled with the pneumatic tyre rollers (PTR).

We are considering changing to an alternate stone source next year  … I can confirm the early dust release has no detrimental impact on the service life longevity of the surfacing laid, it being a nuisance and disruption factor rather than performance.

Lastly, as discussed we increased the aftercare significantly at Perth Road following completion of the works. As noted on the Dundee City Council Road Maintenance website page, we usually sweep the road three times after laying, at set intervals. We have been regularly sweeping and vactoring the road surface in conjunction with spraying with water to suppress the dust   …  we believe this will resolve the worst of the dust problem. We will however continue to monitor …  and shall continue with dust suppression spraying and sweeping until we are satisfied the dust issues are no longer prevalent.”

Nearly three weeks on and the situation is still totally unsatisfactory.    The pavement in particular is still covered in a fine dust - see photo above.    How this can be considered an acceptable standard of work is completely beyond me.

Lessons really do need to be learned from this and I have asked the Roads Maintenance Partnership to take immediate steps to improve the Perth Road situation by dealing with any remaining dust, particularly on the pavement.      This has been an extremely poor situation and quality of work and it needs urgently rectified.
Blog Update by Bailie Fraser Macpherson at 08:30
Email ThisBlogThis!Share to TwitterShare to FacebookShare to Pinterest
Labels: Perth Road
Newer Post Older Post Home