Girls in Print  :   Female Figures in British Comics
An exhibition in the Tower Foyer Gallery, University of Dundee
Now on and running until 21st October 2017 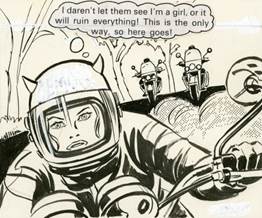 The way that female characters have been portrayed in comics has changed considerably over the years. In Britain, comics aimed specifically at girls were hugely popular from the 1950s to the 1980s, but have now largely disappeared. Dundee-based publishers DC Thomson were especially prolific in this area - as well as the famous Bunty (1958-2001) they produced many other titles including Judy (1960-91), Diana (1963-76), Mandy (1967-91) and Spellbound (1976-77).

The stories and characters in these comics covered a surprisingly wide range. The focus was mostly on teenage girls – their daily lives and their thirst for adventure and new worlds. They addressed important issues such as how to deal with new classmates; how to become a ballet dancer; how to fly a spaceship and save the world…

The girls’ comics of DC Thomson reflect the attitudes of their time, but were also quick to respond to readers’ demands. The traditional pony and ballet strips were soon joined by sports stories, historical dramas and tales of the supernatural. The majority of artists and writers were men, but recent years have seen a huge increase in the number of female writers and artists, creating new representations of women and girls in comics and graphic novels.

This exhibition presents original artwork on loan from DC Thomson as well as a selection of pieces by current comics creators including Maria Stoian, Tanya Roberts and Kate Charlesworth, offering a broad range of interpretations of what female figures can be in British comics culture. The exhibition has been curated by Louise Quirion, a recent graduate from the University’s MLitt course in Comics Studies.
Image above: 'The Nine Lives of Kitty Foster' by Carlos Freixas from Spellbound 1977 (copyright DC Thomson & Co Ltd).
Blog Update by Bailie Fraser Macpherson at 08:30
Email ThisBlogThis!Share to TwitterShare to FacebookShare to Pinterest
Labels: University of Dundee
Newer Post Older Post Home