I have obtained assurances from Scottish and Southern Energy about a high-voltage electric cable replacement project for part of the West End, following the failure of the first attempt to replace the cable last year after some five weeks into roads disruption on Lochee Road, Fleuchar Street, Scott Street, Blinshall Street, Glenagnes Road and other roads in-between.

Last year, after this disruption, the company abandoned the work as the new underground cabling failed a final quality test.

Last year, whilst it was understood that the company would not implement a cabling system that failed a safety test, I questioned why the testing took place some five weeks into roads disruption.   At the time, I wrote to Scottish and Southern Energy seeking an explanation as to why was testing of the new cabling not undertaken before the roads were dug up and made it clear this disruption for no purpose should never happen again.

I have now been advised that the company is coming back next month to re-do the project, as follows :

“The highly technical and challenging project will commence on 6 March 2017 and is programmed to take six months to be completed.

Traffic management systems and diversion of footpaths will be required to protect the public and also our workforce. A brief summary of the requirements as follows:

A923 Lochee Road, Joint Bay 1/2 – An excavation will be located mostly in the public footpath. A traffic management system will see the A923 road slimmed down in two locations to accommodate a diverted footpath. The road will remain open to traffic which will be able to pass with care. The works are programmed to be undertaken between 6 March 2017 – 24 August 2017.

A923 Lochee Road, Joint Bay 2/3 – The excavation is located in the road and will impact traffic turning left into Polepark Road from the City Centre, a traffic management system will see the sequencing of traffic lights staggered to accommodate single direction traffic. The works are programmed to be undertaken between 13 March 2017 - 24 August 2017.

Fleuchar Street, Joint Bay 3/4 – A road closure will be required as the excavation will take up a large section of the narrow public road. The diversion around the excavation is 0.3 miles and would take approximately 1 minute by car. Local access for residents, pedestrians, cyclists etc. will be maintained whilst the excavation is open. The road closure and associated works will be in operation from 20 March 2017 – 24 August 2017.

Scott Street, Joint Bay 4/5 – There a requirement to divert an existing gas pipe ahead of the cable installation works. This will require a full road closure and will be in place for approximately 4 weeks, between 27 March - 24 April 2017. When the gas pipe has been relocated, the road will be opened to a single lane. A traffic management system will be used to protect the public and workforce during the works. All works are programmed to be undertaken between 27 March 2017 – 24 August 2017.

Glenagnes Road , Joint Bay 5/6 – The final excavation will be mainly located on the main road across form the Junction at Logie Avenue. The road is wide enough that traffic will be able to pass the works with care. A traffic management system will be used to protect the public and workforce during the works. The works are programmed to be undertaken between 3 April 2017 – 24 August 2017

The works are being undertaken through our permitted development rights for underground electricity cables and are programmed to be undertaken between 0730 – 1900, Monday to Friday and 0730 – 1700 on Saturdays. We do not anticipate the need to operate on Sundays unless an emergency situation arises.

Where works are in a residential zone, Fleuchar Street as an example, we will aim to begin the working day from 0800.”

I therefore wrote to Scottish & Southern Energy as follows :

“Can I have an assurance that the new cable has been fully tested in advance of the work taking place to give a guarantee that, unlike in 2016, the area will not be disrupted then the work abandoned due to failure of the safety test on the new high voltage cable?”

I have now received the following reassurance from the company’s Community Liaison Manager :

I am pleased that Scottish & Southern Energy has given assurances that the new cabling will have completed its testing before any road is dug up to fit it.    We cannot have a re-occurrence of what happened last year.     There’s been a lot of utilities’ work in the area in the past year and I am anxious this electricity work is undertaken with the minimum of disruption to residents and businesses in the area. 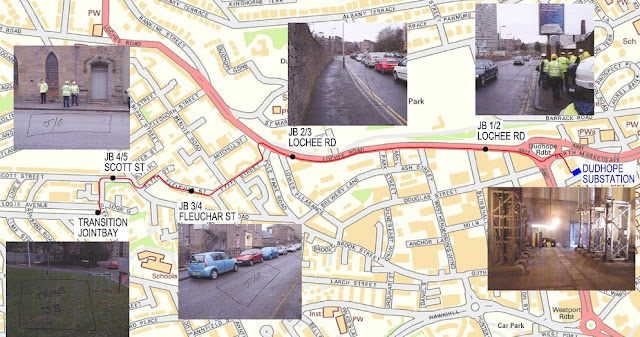