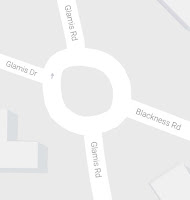 Residents will have noted that the temporary traffic lights on Blackness Road at the Glamis Road/Glamis Drive roundabout (see right) have disappeared.     However, this is unfortunately not because the works by Scotland Gas Networks (SGN) are completed.

I have been updated by Scotland Gas Networks' Team Manager as follows :

"Unfortunately our work at the Glamis Road roundabout is well behind schedule due to the ground conditions we are encountering.   However, as Scottish Water (SW) is programmed to start in Blackness Road shortly which would conflict with our work, we are lifting the traffic management at the roundabout before they start and will return to complete our work here after SW have finished.

In the meantime we will be continuing on Glamis Road itself as this won’t disrupt traffic, and will also be returning to Perth Road to complete the service works and mains abandonment which we had to abort previously.

Scottish Water is starting Blackness Road 20th February for approximately 2 weeks so we’ll be back at the roundabout probably mid March for about 2 weeks."

The Scottish Water work is further east on Blackness Road.   The City Council has further updated me as follows :

"The SW work will start 20 February at Glenagnes Road junction.    The second week they will move south to Rosefield Street for the second week.