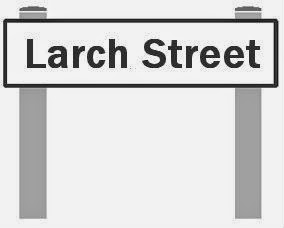 Residents have pointed out the lack of a 'Larch Street' sign at its west end, and, confusingly, an 'Edward Street' sign was recently placed at the back of the Fire Station, which is causing confusion with deliveries.

I took this matter up with the council's Roads Maintenance Partnership who have advised as follows:

"The replacement street name plate for Edward Street recently erected on an existing pole behind the Give Way lines on Edward Street is in the correct location.   However, I would agree that there is nothing indicating the west-most end of Larch Street where it changes from Forest Park Place.

An order will therefore be raised to erect a new street name plate on low level poles outside numbers 70 and 72 Larch Street within an approximate timescale of eight to ten weeks."
Blog Update by Bailie Fraser Macpherson at 08:30
Email ThisBlogThis!Share to TwitterShare to FacebookShare to Pinterest
Labels: Larch Street
Newer Post Older Post Home