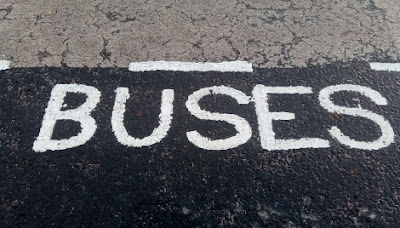 As has been pointed out to me :

"This has removed the give way markings from the turning that comes off the Hawkhill when you on to Brown Street.   It has resulted in cars taking that corner which is partially blind due to the hedges at speed.
In the period since layout has been in place, I have seen a handful of cars having to swerve or stop/slow suddenly due to pedestrians crossing as they come out of the flats opposite Duke's Corner or cross the other way."

This is a very valid point and I raised it with the City Council.

The Transportation Officer (Road Safety) in the Traffic & Road Safety Team has now helpfully updated me as follows :

"I have ordered a slow marking to be installed on the slip road, and a new road layout ahead temporary sign.

These shall be installed as soon as Tayside Contracts can get them programmed.