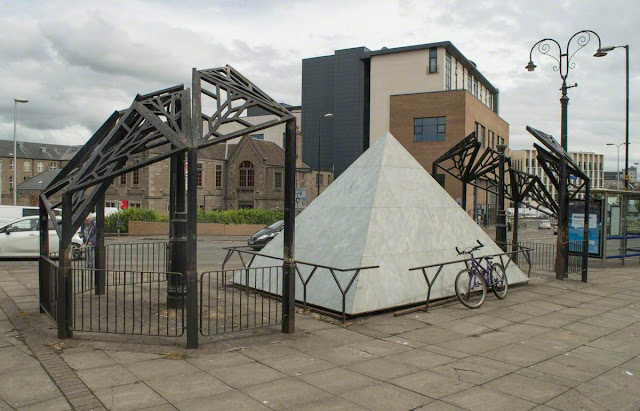 Residents will know the artwork in the West Port, where public toilets once sat - photo above.
Art UK explains its background :
"Pyramid and Canopies - Stan Bonnar
Commissioned in 1983, the West Port 'Pyramid and Canopies' was not only a sculptural artwork, but also formed the roof structure and stairway down to a newly modernised underground public toilets.
The last images in the series, provided by the artist, show the work as it initially appeared. Bonnar was given the brief of proposing artworks for the West Port area of Dundee, and during this creative survey, he saw that the old Victorian 'men only' public toilets had fallen into disrepair."
Stan was recently in touch with me about the current state of the artwork which definitely needs some tender loving care to remove graffiti, repaint it and clean the pyramid.
The City Council's planning officer who deal with public art matters is kindly arranging this.
Stan has suggested some improvements including creating seating - to quote him :
" ...  the seating would be installed as part of a conservation scheme for the trees and pyramid at some time in the future.  I hope that the artwork will be able to be 'topped off’ by reinstating the globes.
It would be great if they were made to light up as this would accentuate their functioning in the artwork as a symbol of oneness. (red supporting blue - blue supporting red - each the environment and meaning of the other).
And of course this is reflected in the symbolic value of the pyramid."
Stan has kindly produced a mock-up of what this could look like - below : 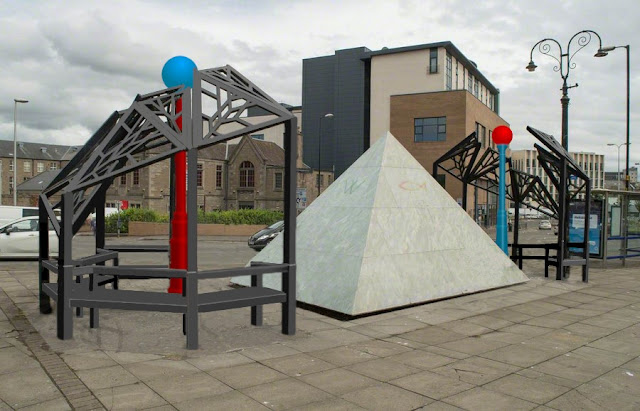