Stories of Hope and Forgiveness from the Burma Railway 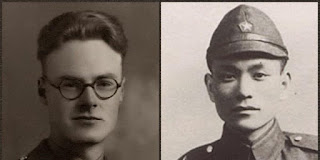 Eric Lomax’s book, ‘The Railway Man’, records his terrible experiences as a Japanese prisoner of war.    The book inspired the film of the same name starring Colin Firth, Nicole Kidman and Jeremy Irvine.

Charmaine McMeekin is Eric’s daughter and she will speak movingly about living with the painful legacy of her father’s experiences and her own journey to find peace and reconciliation with him.

Charmaine was a nurse and midwife, she is now a counsellor and psychotherapist in Edinburgh.

Captain Clarkson Blackater was also captured by the Japanese in 1942 and sent to work on the notorious Burma -Thai Railway.

The secret diary he kept during his ordeal became the basis of his book ‘Gods Without Reason’.

His daughter, Phyllida, and grandson, Piers Bowser, will use extracts from his book, along with private letters and poems to reveal how his faith and his love for his family sustained him through his dark days in captivity.

Proceeds from this event will go to Erskine Care for ex-servicemen.  Tickets, priced at £5, are available here or at the door on the evening.
Blog Update by Bailie Fraser Macpherson at 07:00
Email ThisBlogThis!Share to TwitterShare to FacebookShare to Pinterest
Labels: The Steeple
Newer Post Older Post Home