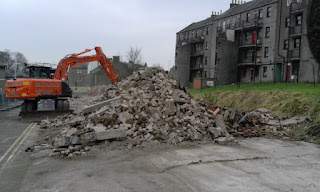 Further to the recent demolition of the former council lock-ups in Glenagnes Street (see right), I asked the City Council when the area will be completed to create parking spaces and to erect the promised fencing between the area and the flats in Blackness Road to the south.

I have been advised as follows :

"Tayside Contracts has inspected the formation at Glenagnes Street.    They have scheduled to commence making good for a parking surface week commencing 18 April 2016.

This includes removing the double yellow lines from the south carriageway which otherwise would see residents ticketed.