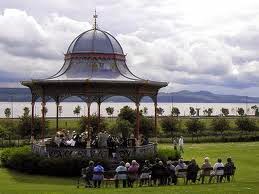 It starts at 2pm on Sunday 22nd June at the bandstand.

A number of residents complained about the situation that arose at last Sunday's concert where the council inadvertently failed to provide the seating for both the Tayport Instrumental Band and the public - and left the bandstand locked.   All credit to the band who went ahead with the concert and also the residents who kindly brought out some seating from their homes for some of the older band members!

The Head of Environment Management at the City Council has now updated me as follows:

"We have had an internal investigation regarding the non appearance of chairs at Magdalen Green last weekend and it appears that this had been down to a member of staff being off sick and the communication channels not working as they should.

We have taken steps to address this in that all the Duty Officers who are on at the weekend for the next few months have been given a copy of the whole list of the forthcoming Band Concerts.

In addition to this the information regarding the Band Concerts have been circulated to all our key Staff as a part of our Weekly Briefing process.  Each of the Band organisers, in relation to the accepting letters for the bookings, were given the weekend duty Officers number in case of any problems.  We are sending out letters, again, to each of them just reinforcing this number in case there are any emergencies.

In terms of the weekend duty number this is something we are looking to circulate wider in case there are any other issues that are raised by members of the public etc outwith normal working hours.

Again, I can only apologise for this oversight and hopefully we have taken measures that this should not happen again."
Blog Update by Bailie Fraser Macpherson at 08:30
Email ThisBlogThis!Share to TwitterShare to FacebookShare to Pinterest
Labels: Magdalen Green
Newer Post Older Post Home