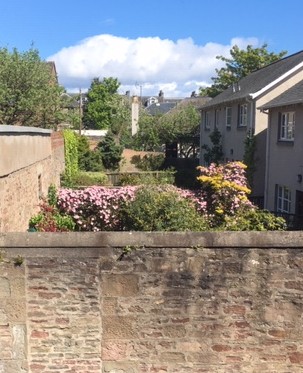 Many thanks to the Step Row resident who sent me this photograph of a part of walling in the street that looks a little smoke-damaged.
She was told by a lovely elderly lady who lived at 33 Step Row long ago, that on VE Day, local folk lit a celebratory bonfire and all brought out chairs to celebrate together.

The elderly lady who told the story many years ago was the late Mrs Margaret Clark - Peggy to her friends.   Born around 1901, she was one of 13 children of a shepherd in Aboyne and was in her eighties when she passed away.   She lived across the landing to her brother William Watt and his wife in the first tenement at number 31.   He had retired as lighthouse keeper on the May Island, possibly the last to man it.

With the recent VE Day 75th anniversary commemoration taking place, it was great to learn about this little piece of history in the West End.
Blog Update by Bailie Fraser Macpherson at 07:00
Email ThisBlogThis!Share to TwitterShare to FacebookShare to Pinterest
Labels: Step Row
Newer Post Older Post Home