On Saturday 24th November at 11am (doors open 10.30am) the Cappuccino Concert will showcase fiddler Kevin Findlay’s book and CD “The Lochee Sessions.” 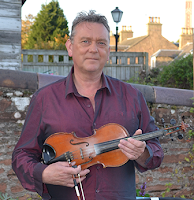 Kevin Findlay has been a member of Boogalusa since 1992 and has recorded 3 albums with the band. Notable gigs include the Festival Europe d’Art in Niort, France, Shetland Folk Festival, Orkney Folk Festival,Glasgow Celtic Connections and Aberdeen Jazz Festival.   He has appeared on The Big Breakfast, Pebble Mill at One and Aig Asaig Gaelic TV show; as well as live performances on Radio 1 and Radio Scotland.

He is a founder member of the Mad Parrot Ceilidh Band, formed in 2002, and has performed at ceilidhs and festivals in many locations, including Oman in the Persian Gulf.

In 2006, he became Musical Director of Tayside Young Fiddlers.   He has overseen the transformation of TYF into a group which performs material at the cutting edge of the vibrant Scottish musical tradition. He arranged and conducted their CD album Rockin’ the Baby in 2014.

Joining Kevin for the event will be two Mad Parrot colleagues, Lindsey Duncan on guitar and Wighton’s own Helen Forbes, on whistle.

Admission to a Cappuccino Concert is £5.    Tea/coffee and biscuits are available for a small donation.
Blog Update by Bailie Fraser Macpherson at 07:00
Email ThisBlogThis!Share to TwitterShare to FacebookShare to Pinterest
Labels: Friends of Wighton, Wighton Heritage Centre
Newer Post Older Post Home