In yesterday's 'Courier', having been challenged about the failure of the SNP to deliver an alternative to PPP capital funding that would allow for further schools improvements in Dundee, the SNP Education Convener, Cllr Liz Fordyce, made the extraordinary claim that the new primary schools building brought forward by the previous Labour/Liberal Democrat council administration after 2007 was possible because of “flexibility” in council capital budgets permitted by the SNP government.

Unfortunately for the SNP administration, this claim has absolutely no basis in fact.
Because of the failure of Alex Salmond’s government to bring forward a viable alternative to PPP funding, schools building new-starts have greatly slowed across Scotland since 2007 as the only avenue currently open to local authorities is the prudential funding model (plus capital receipts if available). The prudential funding model, the replacement for the former Section 94 capital borrowing consents, was brought in by the previous Labour and Liberal Democrat Scottish Executive and has the square root of nothing to do with the SNP.
Pressure is building upon the SNP administration to explain when the alternative to PPP funding is going to become available. Cllr Fordyce, within days of becoming Education Convener said she would be meeting the schools minister to press Dundee’s case for more funding.
The council leader thereafter conceded that there would be a further cross-party meeting of council group leaders with Ministers on the issue. Since then, we have seen total silence on the issue from the SNP. Perhaps Mrs Fordyce would like to explain the success or otherwise of her meeting with Ministers and give us an indication as to when the cross-party meeting with Ministers will take place?
This is too important an issue for Dundee for the SNP to be dragging their heels. If we are to continue the schools improvements program 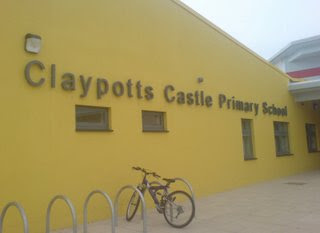 me in Dundee and build more high quality schools fit for 21st century teaching (like Claypotts Castle Primary School - right), the SNP government and the administration in Dundee has to get the act together – the so-called “Scottish Futures Trust” has to become real. The SNP has thus far replaced PPP with nothing and this is holding up making further improvements to the school estate in Dundee.
Blog Update by Bailie Fraser Macpherson at 10:18
Email ThisBlogThis!Share to TwitterShare to FacebookShare to Pinterest
Labels: Capital funding, Education
Newer Post Older Post Home