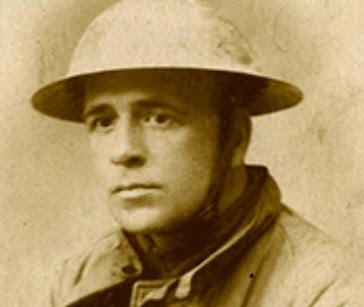 As a member of the Black Watch's 4th Battalion during the Great War, Joseph Johnston Lee spent time not only living and fighting in the trenches, but also as a German prisoner of war in 1917.

Incredibly, the Dundonian channelled the experience into his literary and artistic passions, writing poems and drawing sketches of the wretched time to send home.

He is often referred to as Scotland's forgotten poet, but in his day he was widely regarded as one of the best in the world.

Tomorrow evening sees the launch of a new edition of Lee's poems.    Held as part of the Dundee Literary Festival, the evening will include a biographical and critical introduction and readings of his poetry.

The event starts at 7.30pm tomorrow in the Bonar Hall and is free but ticketed - get your tickets by following the links here.
Blog Update by Bailie Fraser Macpherson at 08:30
Email ThisBlogThis!Share to TwitterShare to FacebookShare to Pinterest
Labels: Dundee Literary Festival
Newer Post Older Post Home