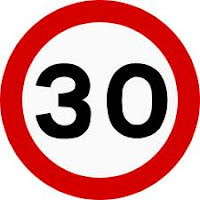 Although most drivers adhere to the revised 30mph limit, I get complaints from residents about a minority of drivers who drive at more than the limit.   I have, on behalf of residents, raised this concern with both the police and the City Council's Head of Transportation.    The Head of Transportation has responded saying:

'I use this section of road frequently and can envisage the situation as described, and in both directions not just when vehicle exit Riverside Avenue.

We will look into the provision of one of these speed activated signs whereby vehicle exceeding the speed limit are given a visual reminder that the speed limit in force is 30mph.'

This is a sensible suggestion that local residents will welcome.
Blog Update by Bailie Fraser Macpherson at 06:30
Email ThisBlogThis!Share to TwitterShare to FacebookShare to Pinterest
Labels: Perth Road
Newer Post Older Post Home