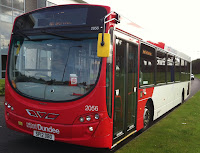 I have previously updated residents about the busing arrangements for pupils.   However, back in June, at the request of parents, I raised the following concern with senior officers at the City Council (I have abridged the content as it was rather lengthy) :

"Following Harris Academy issuing its pack regarding the decant to all pupils to take home ... I have had a steady stream of concerns expressed about the 11S and 12S arrangements.

As I alluded to at the Project Board, the concern is that, as the 11S and 12S are by far the best route (ie most direct and no need to change bus in the city centre) for pupils from the West End getting to Lawton Road, the potential for pupils not getting on down the route is real.

(Parents) expressed concern at the advice not to wait for the “school bus” but to set off earlier using service buses – one, for example,  feels his daughter is sufficiently young that she would struggle with and be stressed by negotiating bus changes (presumably 5 to city centre then 1A or similar to Lawton Road area) in a bus city centre and he is naturally concerned that if she waits for the 12S (the school bus that is nearest to home) she may not get on it as it may be full that far east of the start of the route.     I note that at the project board a commitment was given to have a staff member on each “S” buses at the start of term to see that all runs smoothly, but what actually can a staff member do if the bus is full and a child is left behind?     I’m particularly concerned for pupils trying to alight in streets like Brook Street or Milnbank Road where there is no service bus that runs anywhere near to Lawton Road.

He and other parents are asking the same question I asked at the Project Board – why is there not a “duplicate” service even for the first few days to see the extent of actual demand?    Better that than pupils left stranded at bus stops surely?    I do not buy the argument at all that if a duplicate was provided at the start there would be an expectation of running this long-term.   If demand settles down to less than a bus-full, the duplicate can simply be take off.

I would ask that a re-think on this is undertaken."

After a fair bit of correspondence between myself and officers, I am pleased to say that the Head of Transportation has now advised:

" ... we have arranged for additional vehicles to be available on Thursday and Friday as a contingency.  Pupils making their way to Harris Academy at Lawton Road should follow the advice issued in June 2013.

The transport operation will be assessed on Friday.

We have resourced two additional vehicles to cover both routes."

I am pleased that there will be a temporary duplicate service on both the 11S and 12S on Thursday and Friday so that, at the end of this week, it can be assessed where or not having just one 11S and one 12S service is sufficient.    I have asked to be updated on the situation after the end of this school week.
Blog Update by Bailie Fraser Macpherson at 08:46
Email ThisBlogThis!Share to TwitterShare to FacebookShare to Pinterest
Labels: Bus Services, Buses, Harris Academy
Newer Post Older Post Home