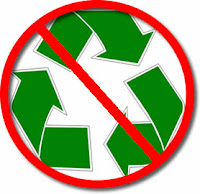 As residents are aware, I have, over many weeks, been calling for Dundee City Council to rethink its decision to restrict what can and cannot be recycled at the Riverside Civic Amenity Centre.

As reported in yesterday's Courier, I have strongly backed concerns raised by West End Community Council Chair Andrew McBride about the city’s waste policy and recycling arrangements.    Andrew is spot on in his criticisms of the recycling arrangements.    The decision to restrict recycling at Riverside must be reviewed.   It is plain daft to have people having to drive right across the city to recycle certain items and the extra car journeys are clearly not environmentally friendly.

I have been in correspondence with the City Council’s Environment Department for weeks, calling for it to review the decision to restrict what can be recycled at both Riverside and Baldovie.   At Riverside, the council no longer accepts bulky items and it is now the only main site for garden refuse.

In today's Courier, I highlighted a recent complaint from a West End constituent who had wanted to recycle a relatively small amount of plastic from a broken toy pram and a 3-wheeler pedal bike.   The constituent, on arrival at the Riverside site, was told this could not be done at Riverside, despite it advertising that it takes plastics.   When I enquired on his behalf about this, I was advised by the council’s Waste Policy Manager:

“ … the acceptable household plastics are detailed on the side of the skip in question - these are normally what would be termed "packaging", ie bottles, containers etc.

Your constituent is right in that there isn't another skip for the commodities mentioned - e.g. composite and dense plastics etc. This type of material is not recyclable here, and is classified as residual waste as a result. Obviously since the change in waste acceptance criteria at Riverside, there is no residual waste skip there, which necessitates an additional journey to Baldovie to dispose of such waste.”

There is no doubt that the recycling arrangements were now confusing and unhelpful for constituents and I now received dozens of complaints about the situation.

The council claims that the very significant additional private car emissions will be “largely offset” by less council HGV emissions but I don’t think anyone seriously accepts this.     The number of private vehicle movements has significantly increased because people are having to drive right across the city with some recycling as their nearest site no longer accepts the recycling they have.

I also think it is a highly suspect way to encourage people to recycle by reducing their recycling options at the city’s civic amenity sites.   I would reiterate my view that if there are only two main civic amenity sites in a city of 145 000 people and these two sites are 9.3 miles apart, both sites should have the full facilities to avoid unnecessary private vehicle movements across the city.
Blog Update by Bailie Fraser Macpherson at 06:00
Email ThisBlogThis!Share to TwitterShare to FacebookShare to Pinterest
Labels: recycling, Riverside Avenue
Newer Post Older Post Home