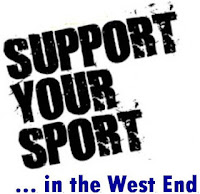 Back in May, I welcomed improvements that the City Council has planned for tennis facilities across Dundee, including a new porous macadam surface for the Victoria Park Tennis Courts.

I don't doubt that the Andy Murray success at Wimbledon 2013 will encourage more and more people to take up tennis and so it was good to see the courts at Victoria Park were very well-used last week during the really good weather.

But the fact remains that the playing surface is from the old days of red shale and blaise courts and it badly needs upgrading,

I asked for an update from the City Council on improvements planned for Victoria Park's tennis courts and have been advised by the Head of Environmental Management:

" ... the promotion and upgrade of public tennis courts in Dundee was agreed at committee on 20th May 2013.  In the action plan it outlines that Victoria Park will have the blaise surface replaced with an all-weather porous macadam surface and replacement of the perimeter fence.

This is scheduled for anytime between 2014-2016.  If we manage to secure external funding over and above the monies for Dawson Park, then we would like to look at the potential of bringing some of the tennis renovation programmes forward."

I am anxious to see the improvements at Victoria Park's tennis courts as soon as possible and have asked the council that all efforts are made to ensure this happens.
Blog Update by Bailie Fraser Macpherson at 06:00
Email ThisBlogThis!Share to TwitterShare to FacebookShare to Pinterest
Labels: Dundee City Council, Victoria Park
Newer Post Older Post Home