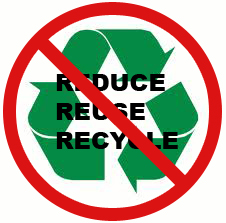 The council's figures for April to June can be downloaded here.   They were provided by a senior officer in the council’s environment department and came with the following commentary:

“I have provided some figures for April / May / June (since the closure of Marchbanks Recycling Centre).   However, normally we would only consider a full year's period of data in making any kind of comparison, therefore I would suggest the 3 month figure to-date for this year is treated with caution.

Within this table are the amounts of green waste taken to Riverside Recycling Centre along with the corresponding tonnage for previous years.  Also, there are figures for the overall amount of green waste processed at our composting site, the amounts of wood/timber recycled at the recycling centres and the amount of residual waste taken to the recycling centres.  We do not yet have a figure for the overall amount of residual waste.”

I do accept the point that there is a limit to the conclusions one can draw from just 3 months’ data but the figures do tend to indicate what has been my concern since the removal of bulky waste facilities at Riverside and garden waste facilities at Baldovie – that it would impact adversely and this appears to be borne out in the initial recycling figures provided by the council.    The green waste tonnage drop is particularly concerning but will come as little surprise.

There is anecdotal evidence of many residents now putting items into their general waste bin that would previously been recycled and the figures at the recycling sites now bear this concern out.    There are also concerns about possible fly-tipping.   The council is a country mile short of meeting its Scottish Government recycling target for 2013 and the trend looks rather bleak.

The issue is wider than the basic recycling tonnages achieved and also covers increased private vehicle movements across the city as people are having to drive further to recycle bulky items and garden waste.

The council claims that the very significant additional private car emissions will be “largely offset” by less council HGV emissions but I don’t think anyone seriously accepts this.     The number of private vehicle movements has significantly increased because people are having to drive right across the city with some recycling as their nearest site no longer accepts the recycling they have.

I also think it is a highly suspect way to encourage people to recycle by reducing their recycling options at the city’s civic amenity sites.   I would reiterate my view that if there are only two main civic amenity sites in a city of 145 000 people and these two sites are 9.3 miles apart, both sites should have the full facilities to avoid unnecessary private vehicle movements across the city.
Blog Update by Bailie Fraser Macpherson at 06:00
Email ThisBlogThis!Share to TwitterShare to FacebookShare to Pinterest
Labels: Dundee City Council, recycling
Newer Post Older Post Home