I have today spoken with a large number of residents who are naturally furious at the explosion of graffiti vandalism that happened in the Blackness Road/Glamis Road area overnight.

Although there has been, over the years, several phases of bad spates of graffiti appearing, what happened overnight must be one of the worst examples of a large amount of graffiti spread over a wide area that I have come across.

The vandalism is across a large number of private garages, doors, walls and other sites as well as bus shelters and utility boxes - see some examples below taken earlier today. 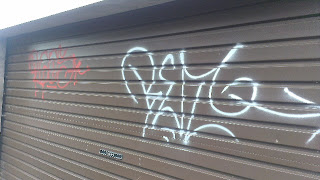 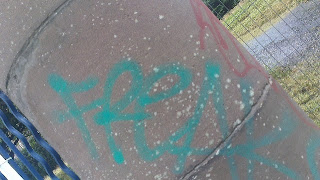 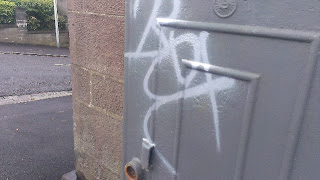 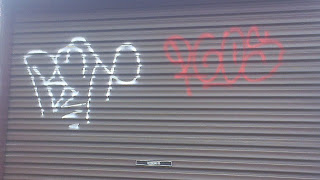 This morning, I was immediately in touch with both the police and the City Council's Rapid Response Team and council staff will tackle as much of the graffiti that residents have been unable to remove.    This afternoon, I spoke with a number of residents who have already tried removing graffiti from their property.

This sort of mindless vandalism is infuriating and I know that the police will put in significant effort to get those responsible identified, as they have successfully done before.   If any resident saw anything suspicious overnight in the area, they are urged to contact the Police Scotland non-emergency number 101.   Many thanks.
Blog Update by Bailie Fraser Macpherson at 16:27
Email ThisBlogThis!Share to TwitterShare to FacebookShare to Pinterest
Labels: Blackness Road, Glamis Road, graffiti
Newer Post Older Post Home