Photopolis is a major photographic resource in Dundee City Council's ownership that I have, with the permission of the Communities Division of the council, featured photographs from in the past.

It consists of a significant selection of quality photographs from various collections in the Central Library and the City Archives that can be accessed via the City Council's website, allowing easy access to large numbers of historical photographs.

By popular request, during this month, I'll again feature some of the superb West End photos on Photopolis.

As a start, pictured below is Grosvenor Terrace - 307-313 Perth Road - and to quote Photopolis :

"The residents in 1889 included the principal of University College, William Peterson MA, LLD, William K. Bruce, a confectioner who worked for the famed Dundee firm, Keillor & Sons, and W. A. Brown, of whom nothing further is known.

No. 1 was the home of Alexander M. Grimond of the jute spinners J. & A. D. Grimond, of Bowbridge and Maxwelltown Works, with offices in King Street, and great uncles of the prominent Liberal politician, Jo Grimond." 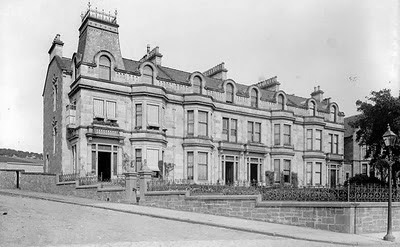