Call for consultation on 20's Plenty fails by a single vote 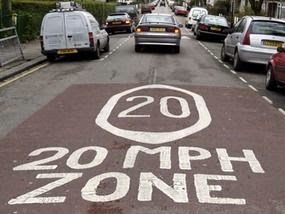 Further to my earlier calls for 20's Plenty in appropriate residential streets in Dundee, at tonight's City Council City Development Committee I proposed the following motion :

Committee notes Report 273-2014 by the Director of City Development on 20mph speed limits but does not concur with the conclusions in Paragraph 4 of the report.

Committee calls for the development of a policy on the implementation of 20mph zones and limits, and, as a first step, the Director of City Development is instructed, within the next six months, to consult widely with community councils, tenants’ and residents’ associations, other representative community organisations and the public across all eight Local Community Planning Partnership areas to discuss their views of where 20mph limits would be appropriate and would be of benefit to residential amenity and road safety in each community.

The Director of City Development is thereafter instructed to bring a report to committee on the outcomes of such a consultation exercise, with a view to thereafter considering commencement of a phased programme of introducing 20mph limits on residential roads from 2015/16 onwards, giving due consideration to the revenue and capital and enforcement implications of such a programme.

My motion had the support of Labour, Conservative and Independent councillors, but was unfortunately lost by a single vote (14-13) as the SNP administration voted it down.   What is particularly astonishing about the SNP's complacent position is that their own party colleagues in Edinburgh have recently been instrumental in introducing 20mph in residential areas there!    No consistency there then.

Many cities are now adopting 20mph zones - bringing a safer environment to residential areas - and the Dundee City Council position on this is years out of date;  completely behind the curve in terms of current thinking.   The case for 20mph in appropriate residential areas is overwhelming and the 20's Plenty for Us campaign has published useful factsheets on this that you can access here.   I would like to thank the 20's Plenty for Us campaign, Friends of the Earth Tayside and Living Streets for their support and to Mr Paton, a Coldside resident, who spoke eloquently at committee tonight about the need for 20's Plenty.