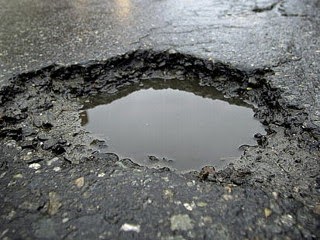 As reported in last night's "Evening Telegraph", I am calling on Scottish Government to properly address roads condition across Scotland with a view to giving additional funding to local authorities to tackle the worst-conditioned non-trunk roads.  Trunk roads are a central government responsibility but the same issue with regard to inadequate funding applies to trunk roads too.

In the recent budget, the Chancellor announced a £200 million new budget to allow local authorities in England but, as the national roads budget in Scotland rests with Scottish Government, the announcement for England merely served to highlight the need for Scottish Government to be doing more to help local councils tackle potholes across residential streets in Scotland.

Locally, like I am sure other Dundee councillors, I get many requests from constituents for the council to tackle potholes on local roads – a recent example being the poor roads surface in parts of Blackness Road – but there are many other examples.  The council’s Roads Maintenance Partnership does a good job with the funding available to it, but not enough priority is being given to this important issue in terms of budgetary provision.

In the 2013-14 council capital budget discussion, I proposed not spending capital monies on a new council HQ for the Environment Department and instead spending it on school building improvements and roads resurfacing.    The council’s administration has since seen sense on the Environment HQ expenditure and has abandoned that project but the roads resurfacing budget has not benefited from that as it needs the sort of £2.95 million budget boost in future years my proposals would have achieved.

There is a related issue here that could slow down the deterioration in the condition of residential roads in Dundee.   City of Edinburgh Council has rightly decided that, in highly residential areas, 20 mph zones is the way forward.   This is largely on road safety grounds and I had long supported lower speed limits in highly residential streets – particularly where there are elderly residents or children resident and in particularly narrow streets in the West End, like the Perth Road lanes and in the Logie Estate.     Dundee City Council’s administration has been very slow to embrace the strong public support for the 20s Plenty in Dundee – unlike other councils such as Edinburgh’s.

The other advantage of 20s zones is that they will reduce wear on the roads and save money in the long term – another good reason for adopting this approach.
Blog Update by Bailie Fraser Macpherson at 08:30
Email ThisBlogThis!Share to TwitterShare to FacebookShare to Pinterest
Labels: Dundee City Council, Roads
Newer Post Older Post Home