Campaign to save RBS on Perth Road continues 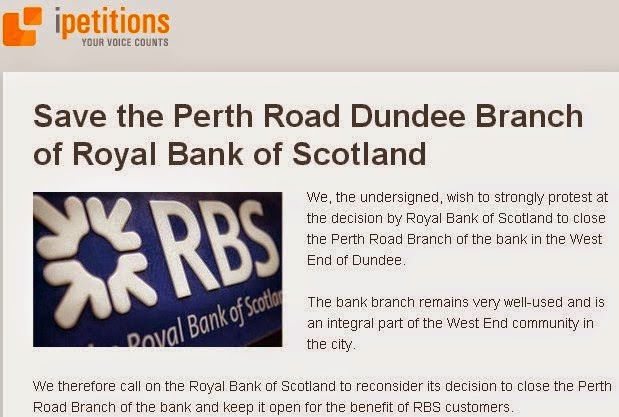 I am on Wave 102 News this morning, continuing the campaign against the Royal Bank of Scotland's decision to close the Perth Road branch of the bank.

I have criticised RBS management for failing to provide customer usage statistics when trying to justify its proposed closure.

When I initially contacted the bank to express concern about the proposed closure, the bank’s response indicated that a key factor in its decision was drop in customer usage of the branch and it cited a 30% reduction in branch transactions since 2010 across its bank network.

However, the branch continues to be very well used by customers in the local community, so I replied asking for details of the actual customer usage at the branch in the past five years.   The bank has since had to admit that customer use at the Perth Road Branch has not fallen in way usage has fallen in other branches.”

The bank has yet to provide any of the actual details of customer usage at the branch, despite repeated requests to do so.    On 7th April, their Senior Public Affairs Manager said to me:

“I’ll look into it further and come back to you if we can provide more data, but I know we won’t be able to go back over a five year timeline.”
There has been a total silence from the bank since then, despite a reminder sent by me.

It is disappointing that the bank's arguments for closure stand up to no scrutiny whatsoever.   RBS simply fails to provide any evidence to support their closure proposal.   Please sign the petition to keep the Perth Road Branch of Royal Bank of Scotland - you can access the petition here.

You can listen to my interview on Wave 102 here:
The news bulletin also carries an item about the opening of Dundee Museum of Transport this coming weekend.
Blog Update by Bailie Fraser Macpherson at 08:30
Email ThisBlogThis!Share to TwitterShare to FacebookShare to Pinterest
Labels: Perth Road
Newer Post Older Post Home