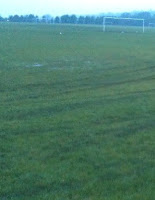 Further to the concerns expressed in the Evening Telegraph earlier this week about large stones bursting through the pitches on the south side of Riverside Drive and resulting in a number of accidents, I sought assurances from the Environment Department of the City Council that proper reinstatement of the pitches was in hand.
I have received the following helpful response :
"This is now in hand. When the area was cultivated as part of the grass seeding exercise, stones and other debris were brought to the surface. The surface was finished off with screen top soil and as part of the exercise a stone pick would have been done once the grass seed had germinated. This is stones that have worked through the soil due mainly to settling down and the weather conditions.
As soon as we were made aware of the problems we closed the pitches and have had the area cleared of visible stones.
There is always the chance that some stone may emerge due to the nature of the site and we will endeavour to inspect the site more regularly. We have good relations with the users of the site and we would also react to any feedback we receive from the teams and also the referees who have as a role in determining whether pitches are playable."
I am pleased at the prompt response by the City Council and also hope that more regular inspections will ensure the avoidance of any further incidents of large stones on the pitches or any unfortunate accidents caused by them in the future.
Blog Update by Bailie Fraser Macpherson at 08:45
Email ThisBlogThis!Share to TwitterShare to FacebookShare to Pinterest
Labels: Riverside Drive
Newer Post Older Post Home