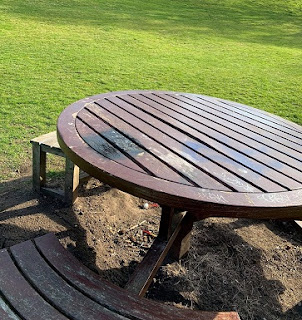 I have recently been in discussion with both Police Scotland and City Council officers following the recent disgraceful vandalism on Magdalen Green that resulted in a table and seating being destroyed by fire.    Additionally, as the photo shows, another table was recently also vandalised although the damage was less severe than happened to the other table and chairs.    Environment management will ensure repair of this.
As I said to the media at the time of the vandalism, it is vital that the vandals do not win and I am grateful to Police Scotland for the comprehensive response I have received in relation to policing resource in relation to the Green.
The council had previously promised Friends of Magdalen Green further tables and seating and this will be provided by around 7th May.    Whilst welcome, it is vital that the possibility of a repetition of previous vandalism is minimised.    Policing is a key part of that but I have also been engaging with council environment management about the provision of static metal bins near to seating and separate static BBQ facilities to avoid portable BBQs being used on tables with predictable disastrous results.
Meantime, BBQ tables promised for the parklet area near the community fridge at the Miller's Wynd car park should be in place hopefully this week.
Blog Update by Bailie Fraser Macpherson at 07:00
Email ThisBlogThis!Share to TwitterShare to FacebookShare to Pinterest
Labels: Magdalen Green, Millers Wynd
Newer Post Older Post Home